Since nothing in the BI statement of principles forbids cheap shots, quote-mining, or the establishment of guilt by association, let's take a look at how certain signatories to Online Integrity are fulfilling their commitment to "basic decency."

I note that an amiable young lady named Republican Jen has a bone to pick with liberals:

[T]he liberals want to stop President Bush and the blessed US military from fighting them??? The first people Islamo-fascists would want to kill in the USA are all the hippies!!! And they are the very ones being used like puppets strings to support "palestine"!!! IDIOTS!!!!!!!!!!!!!!!!

Jen also claims that some or all liberals cheered on the murderers of Atwar Bahjat; she rails against "those who perpetrated these horrendous acts and the liberals who support them."

Hooray, says I, for basic decency. And thank you ever so much, Tacitus and Co., for putting a veneer of respectability on this subliterate dingbat. She may have implied that I applauded Bahjat's murder, but at least she didn't send me any death threats. Or call me a cocksucker.

I submit that a few bodies left to rot on the wire as proof that we mean business would reduce that number to near zero.

Again, I'm sure STV takes his OI pledge about respecting online privacy very seriously indeed, even as he indulges in his masturbatory eliminationist fantasies.

As for the lefty bloggers who've signed onto this thing...well, I suppose the kindest thing I can say is that they put me in mind of this amusing panel from George Herriman's "Major Ozone": 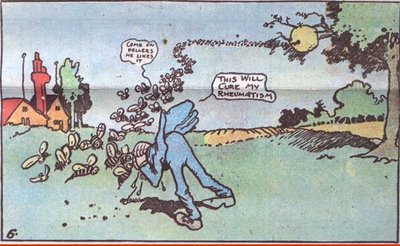 Comments:
But Republican Jen's a Christian, so she can't be all that bad.

Yeah. Tac will point out that hey, these folks are respecting other people's anonymity. So they are OK. And are in their own happy way helping to gain "a sane public square."

You know, a sane public square with decorative corpses hanging from lampposts.

That seems to be his MO, alright. When people quarrel with his concept of "decency," he refers 'em back to the statement of principles.

Which would be fine, if the site were called "Respecting Online Privacy," or something like that. But the combination of a generality like "basic decency" or "online integrity" with a ridiculously narrow set of rules that almost everyone already follows doesn't quite do it for me, logically or ethically.

Hell, I could probably even forgive that, if the son of a bitch just had a sense of humor.

I'm sure he does have a sense of humor, one with lots and lots of integrity and rectitude and civility.

I suggest we make this a regular feature: Online Blogintegrity's Online Integrity Watch. We'll police their members based on their rules, or ours, whichever is funnier. I mean, whichever has a higher concentration Integritons, the sub-atomic particles that create the Force of Integrity.

Because we make all the little things count!