Note: Eef the weengnutbars want to shut down Sadly, No! for posting the truth, we should spread that truth far and wide. ~ egn

As we know, opinion against the war in Iraq, and against President Bush, now stands at between 60 and 70 percent in America. If you’re a right-wing authoritarian follower, how do you continue to prop up the necessary belief that you represent a silent majority of downtrodden patriots, and that someday a real rain will come and wash the scum off the streets?

Step One: Invent a phony threat — for instance, to the Vietnam War Memorial:

As a Vietnam veteran, and suffering through fox-hole combat, and knowing what the anti-war movement did to America and to my morale of me and the morale other troops during the Vietnam era, the thought of elements of those same vile and vicious people attempting to resurrect their venom and use the Vietnam Memorial Wall as a proxy was intolerable. My view was it must be challenged, and in short it cannot happen.

The current anti-war movement is no different than the Vietnam era group, in fact many current participants are the same people who were involved in the 60s and 70s. They lie, deceive, distort, damage, desecrate, spit on our military, curse, hurl insults, and dishonor not only historical sites but hallowed ground if given the opportunity.

Step Two: Create a fake-nonpartisan campaign to ‘protect’ the memorial from the vile and vicious spitters-on and desecrators-of, who are converging on DC in a mammoth hippie tidal wave:

1. Gathering of Eagles is non-partisan. While each member has his or her own political beliefs, our common love and respect for America and her heroes is what brings us together.

Actually, they’re about as non-partisan as this. Note the Vets For The Truth address through which contributions are funneled:

And note, as well, the enthusiastic pre-publicity from commentators such as Michelle Malkin:

SAYING ‘NO!’ TO CINDY
A ‘GATHERING OF EAGLES’ TO MARCH FOR AMERICA

How many times have you sat in front of the TV over the last four years, watching anti-war activists march on Washington, chase the ROTC off your local college campus, vandalize war memorials, insult the troops and wreak havoc under the surrender banner?

How many times have you thought to yourself: What can I do?

As your planning continues, begin referring to all supporters as ‘veterans’ regardless of whether they’ve ever served in the military. This makes it look like it’s a rally of non-partisan veterans — which is altogether much better, and much more likely to be taken seriously by the media, than a rally of Republican zealots frightened that the zeitgeist is escaping them.

Also be sure to stir up the Freeper beehive, because a Freeper will fall for anything if you slap a flag on it — let alone a flag, an eagle, and the word, ‘troops.’ 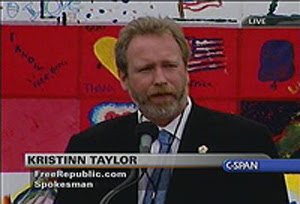 Join forces with other phony-nonpartisan groups:

At last the day arrives. Have a bunch of people stand around heckling war protesters for a few hours: 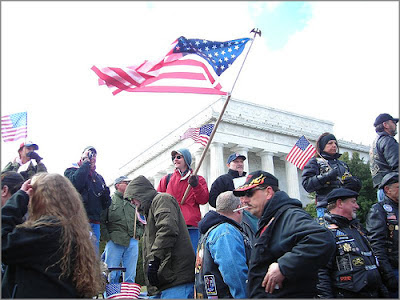 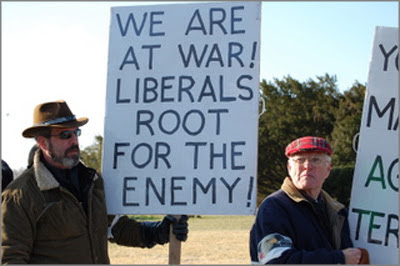 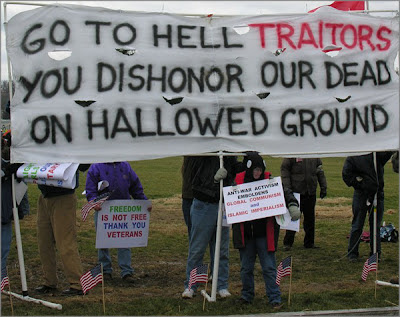 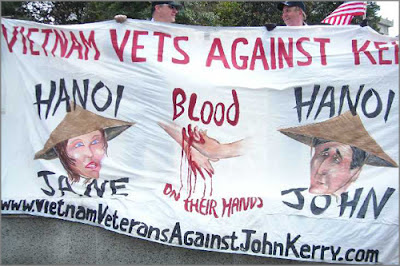 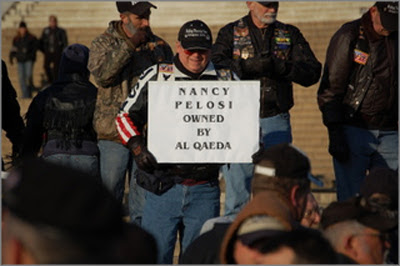 A pure, grass-roots effort, the Gathering of Eagles’ volunteers matched the massive Soros-funded anti-war machine sign for sign, chant for chant, and marcher for marcher. The contrast was most stark right before the entrance to the Memorial Bridge, where Eagles gathered with a field of American flags–while anti-Bush, 9/11 conspiracy nuts wrapped themselves in a figurative blanket of yellow “Out of Iraq” placards. Several of the vets shouted, “Yellow! How appropriate!” in between spirited chants of “U.S.A! U.S.A!” While the classless Cindy Sheehan ranted profanely, the Eagles raised their voices in polite, but roaring disapproval and raised their American flags in answer to the ANSWER socialists’ Che banners and peace pennants.

When history is written, March 17th, 2007 will at long last eclipse March 17, 1967, as the day when soldiers in faraway Iraq and Afghanistan knew for certain, no matter what real time saw them doing, love and respect await their safe return. The day when it was proven to a watching world that Washington war memorials stand for what they always stood for, time immemorial, the day when the graves of fallen American soldiers the world were warmer.

Never again will America’s brave warriors and their cause be abandoned and the people our country has pledged to liberate be left to perish at the hands of tyrants. Those days are most definitely over.

Whilst enjoying the afterglow, make up a jaw-dropping unofficial attendance figure, for instance that 30,000 heroes stood up for America against the dirty-hippie communist menace — of whom there wasn’t really a mammoth tidal wave after all, which also equals a victory.

What an outstanding day! The Eagles soared!

You should be very proud of your fellow veterans, families, and supporters. There’s so much to tell, and we encourage you to post your experiences in the the comments.

In the meantime, two items of business: 1) we have a gallery open for you to upload your digital photos to the website. That way you can share your photos with others. See the tab in the top right corner of the site. 2) the first unofficial estimate of the Eagle turn-out today…

That figure may be adjusted upward as more figure are tallied during the week. Fox News reported today that the anti-war protesters had significantly less than they expected. However, they are erroneously reporting that the Eagles were there in “equal numbers”. The truth is that we outnumbered them by at least three to one!

***Update: Kit at Gathering of Eagles reports on the National Park Service estimate of the GoE turnout: 30,000 strong. The silent majority no more.***


Gathering of Eagles (GoE): An Indicator of Old Media Decline

Gathering of Eagles’ web site reports that they were told by the National Park Service that their GoE estimate is ….. is …..

GoE’s site is also saying that the protester counts being reported elsewhere were 5,000 to 10,000 (the Times reported “thousands” and WaPo said “several thousand,” but both papers acknowledged that the protester turnout was much lower than at a similar event in January).

Remember not to check the original source: Citing AmericaPundit who cites FreedomWarrior who cites someone else citing three other people who cite what Michelle Malkin says about what the GoE site says, is what they mean by ‘the self-correcting blogosphere.’ If it weren’t true, someone would have said so.

Anyone who is not a dirty hippie should be thrilled by the turnout. I figured a few thousand people would show up, not 30,000. This is an estimate from the National Park Service, not from the GoE organization.It’s a testament of rational people trying to take the country back. The sad part is that most of the press was given to the psychotic, immoral moonbats there protesting the war.

Also, if other published figures contradict the 30,000-heroes one, don’t forget to keep up a constant drone of indignant complaint about the biased liberal MSM, because they super-lie about everything with gigantic crazy lies, just for the sake of dragging America down. Malkin updates:

Pure bullcrap. Yup, the journalistic standard-bearers of the NYTimes relied on “several veterans of the antiwar movement” to give them crowd estimates of the Gathering of Eagles. It’s the domestic equivalent of MSMers relying on dubious Iraqi stringers to provide them with war coverage while they sit in their comfy Green Zone offices in D.C. and Manhattan.


Don’t believe the MSM — either their lying by entirely omitting any mention of the numbers of people attending the Gathering of Eagles, or their deliberate playing down of the numbers who did come. The Parks and Service people counted thirty thousand patriots gathered to protect the Wall.

So what else is new, except in this case their lies are more than usually blatant in favor of their personal agenda. The National Park Service’s first estimate of the turnout of Eagles is, wait for it: 30000.


Say guys, I heard some hippies are threatening to desecrate various locations in and around Baghdad. Why don’t the 30,000 of y’all surge on over?

…Hey wait, where did everybody go?

Update: No such Park Service, Parks Service, or Parks and Service estimate has appeared in any form, and no publicly available photo on the Web — although please correct us if we’re wrong — shows more than a couple of hundred pro-war demonstrators in any place at any time. 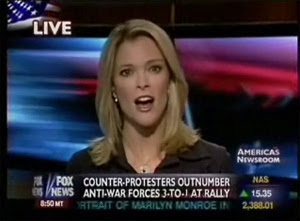 Comments:
Eef any of our readers or compañeros bloggeros wants to mirror either thees Sadly, No! post, or the other Sadly. No! post, feel free. I have been granted Gavin M.'s permission.

Let us spread them all over la blogsfera.