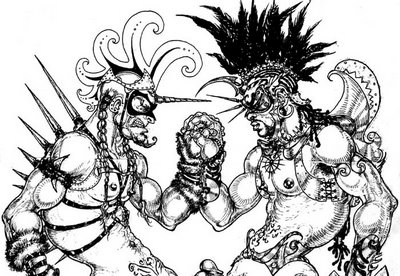 What makes Josh "Tacitus" Trevino (above, left) such a compelling spokesman for online integrity?

His intellectual rigor and ethical consistency, natch. Over at Swords Crossed, he informs a goggling world that certain people call him names, and that these people are denizens of "fever swamps." (Please note, though, that these are metaphorical fever swamps; a goodly number of Trevino's foes are sick and crazy, sure...but not in the sense that making fun of them can be construed as making fun of the mentally ill. That's something only the Vile Ones do.)

In addition to demonstrating, yet again, that there's a right way and a wrong way to engage in lazy ad hominem attacks, Trevino pulls off a nice editorial sleight of hand. He notes that Tristero recently said "Liberals need to learn how to show the Trevinos of American politics no mercy."

Pretty unhinged, huh? Unfortunately for Trevino's sad-sack delusions of holy martyrdom, Tristero's quote is somewhat less melodramatic when one reads it in context:

Briefly, Trevino's rightwing shtick isn't necessary. True, liberals need to learn how to show the Trevinos of American politics no mercy; meaning it's high time we treated them exactly they way they've treated America's most mainstream (many of them superb) political leaders, from Powell to Feingold. And also true, liberals need seriously to polish their ideas and rhetoric.

But in no way does the task of competently advocating an intelligent commonsense (ie, liberal) agenda for the US require the lying and smearing of decent people and majority beliefs that follow from Trevino's "methodology" as surely as pus flows from a deadly infection.

Next, Trevino quotes someone who calls him "a vicious Opus Dei thug." You'd naturally assume that this someone is Tristero, since the quote comes very soon after the words "It's Tristero," and no other author is named. But you'd be wrong. It was actually written by a commenter.

While Trevino's not half so skilled with words as he supposes, he's competent enough to understand that as presented, the quote appears to be by Tristero. And he's been blogging long enough to know that many, many blog readers don't bother to click quote links...particularly in posts by bloggers they agree with or trust.

Tristero's lengthy post makes a number of substantive points, and I'd think that an honest opponent would feel obliged to address them. But instead, Trevino takes one line out of context, presents it as a stand-alone sentence, tosses in an inflammatory comment without noting the change in authorship, and finishes up with some leaden sarcasm about left-wing "fever swamps."

I'm beginning to suspect that the daedal niceties of online integrity will always remain just beyond my grasp.

Comments:
I've got a fever and the only prescription is more Integrity;trade&.

I've got one too. Can't swallow, either...which kinda ruins this weekend's plans for anonymous gay sex.

What about just anonymous gay cuddling?

I'd like for you all to know that I've decided to weigh in on this difficult subject...

I can't believe you call us borish and childish, Zap.

This is boorish and childish:

I'd say the fundies do no pay their headline writers enough, eh?