Over at Penises Touching (beg pardon, "Swords Crossed"), Tacitus informs us that

when the major left-bloggers — including but not even nearly limited to [Jane Hamsher] — began their campaign against the nonpartisan, nonideological Online Integrity, one major excuse given (besides the Ackbar thesis) was that the blogospheric left is more than capable of policing its own — and does so with alacrity.

Dude. There was a CAMPAIGN? I swear to Jebus, I started this site because I independently decided the Online Integrity site needed some funning.

That would make Worf a Merry Man. 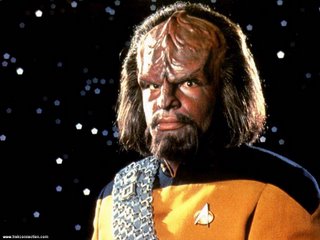 Update At SadlyNo, I asked Tac, Mr Civility himself, what the evidence was that there was a "campaign" against OI. He kindly informed me

It's at a Google Groups, er, group called "Townhouse."

Which is great fun, as a "campaign" confined to a closed e-mail list is a pretty lousy "campaign."

It is entirely possible that many individuals reached the same conclusion about OI entirely on their own. Nobody really needed a "campaign" to be told that New Coke wasn't a very good idea, either.

Comments:
I liked his "hatehateHATE" thing. I'll give it a 7, 'cause you can dance to it. But I wouldn't buy it.

And a pony for everybody what signed the pledge!

It was a massive stunt campaign to show people how much they really LOVED Origionally Coke. (At least that is how I would have positioned it after it failed).

Now Coke has to add a new ingredient every god damn month to build excitement.
Here are the next three Coke coming out.

And the cross over with the hot electronics market
Ipod Coke (with a Pico Ipod in every bottle!) and finally

I mean come on!

ALL HAIL THE MIGHTY CAMPAIGN!

I want a fucking t-shirt.

If this is a campaign, Thers, does that make you Karl Rove?

But what shall we call thees campaign?

However eet would perrrhaps be too much of a mouthful for la journalistas, and would possibly no look so good on la camiseta.

Tambien, thees name should be een English, een order to avoid the deestraction of the inevitable debates wheech would occur over language.

Therefore, my humble suggestion, after muchos pensamientos, she ees thees:

Well, we can always remove the punctuation.

y tambien I understand that los bloggerros go all weak een the knees over the acronyms.