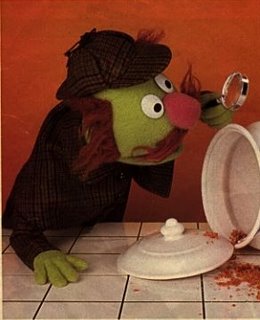 Over at OI the question is raised, "exposing a sock puppet: violation of OI?" The answer, I think rightly, is that it is not:

Regardless of any specific allegations’ veracity, the distinction must be made between a true pseudonym, used for reasons of privacy, and a sock puppet, which exists solely to buttress an existing persona.

Fair enough. But let's stress this point again: "there is nothing inherently wrong with using a 'sock puppet.'”

What is interesting about this statement is that nobody disagrees. Sock puppetry is, in and of itself, not really much of a problem. What it amounts to is someone doing something a bit odd on the Internet. And nearly everyone who has ever accessed the Internet in some way, shape, or form has at some point done something silly, and probably understands the temptation to do something sillier. So availing oneself of the anonymity afforded online to do something so essentially harmless as to mess around in this way is trivial. As trivial as Googling "tits" or "Nelly Furtado" or "hot colostomy pix,", or similar.

Of course, if someone goes totally bananas with the sock puppetry, then it becomes more serious. Like, if they employed sock puppets to add weight to a shoddy but widely cited statistical study on a matter of serious public import, or something.

But if we're going to sort out the ethics not so much of employing a sock puppet, but of exposing one, it is perhaps not sufficient to simply say that no ethical bar prevents you from doing so. Merely saying that nothing prevents you from doing something is not a good reason for other people to think you aren't insane when you go ahead and do it. You are free to spend all your free time at home dressing up like Blossom, or memorizing batting champeens through 1916, or whatever else reconciles you to the Utter Howling Emptiness that is Human Existence. But you're still some sort of a creepy git if you go around bothering other people over a nice dinner out with your Blossom obsession. Ahem. Moving on.

Let me here propose not so much a Postulate, as a Pustulate:

If you post interminable, unreadable, turgid, whiny screeds trying to prove that someone is using a sock puppet, absent the other kind of other stuff Tim Lambert has documented, you're a complete fucking lunatic.

Can't see why anyone who concedes that using a sock puppet is a "Venial Sin" would object. Especially when we add not so much the Corollary as the Crapollary:

If you're going to post a gazillion word wankfest allegedly proving sockpuppetry, you had best (1) actually prove your case; (2) show some reasonable, non-mental-patient excuse for why you ever cared enough to post about it with enough bandwith to choke a Nazgul.

I'm afraid these simple guidelines are a bit rough on Patterico, who, remarkably, seems to have some sort of an actual job that doesn't involve writing extensive dissertations on Glenn Greenwald's use of the semi-colon. They're also bad news for the charming and winsome Ace, who in this general regard writes charmingly and winsomely of a blogger who dared to look askance at his Hardy-Boying, "He is, in short, and idiot." (Very sic).

This is interesting (Scroll down and work back up)

On the one hand you have Seixon who is obsessively finding links weaker than Oliver Stone's in JFK in order to draw an inference of sock puppetry (and without a hint of irony tells the focus of his obsession to "GIVE IT A REST ALREADY").

On the other hand 1) Someone (or some people) outed his personal information 2) Someone called the guys parents 3) He claims someone called him and said "You're a dead man."

Thees ees all about Glenn Greenwald putting a holy smackdown on the weengnutbars.

They were embarrassed, so they are trying to peen thees "sock puppet" handle on heem, weethout much success.

Joo would theenk the leetle nutbars would get sick of being Greenwald's chew-toy, just as joo would theenk Greenwald could find more important targets upon wheech to unleash hees considerable talents.

Heh. If you have to search for a rational excuse to violate blog integrity, you have none. Ha ha.

Fantastic article! Your style is so refreshing in comparison to most other writers. Thank you for posting when you do, I’ll be sure to keep visiting!
Tiffany Jewelry craftsmen designed to make, coupled with unparalleled superb work, keep abreast of fashion trends!