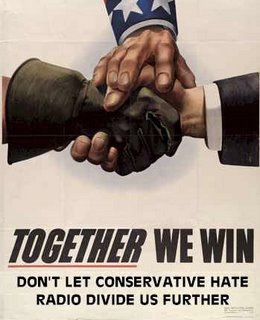 A sympathetic SFGate article on Spocko features this droll counterattack from KSFO:

In a statement Wednesday, KSFO program director Ken Berry said, "Many of the remarks attributed to KSFO on the Internet are old, lacking context and, in some cases, outright lies. When our hosts have stepped over the line, they have apologized and have been reprimanded."

Which line is that, Ken? And which of Spocko's audio clips are "outright lies"?

I guess we'll find out at noon tomorrow. KSFO is planning a sort of community outreach program, in which the hosts targeted by Spocko will take calls and e-mails from interested parties, and perhaps even apologize for - or at least explain - some of their more offensive remarks. That's the official story, at least. My assumption is that it'll actually be an unctuous wingnut love-in, with plenty of starstruck listeners begging the hosts to stand firm against political correctness, and a handful of inarticulate lefty dissenters trotted out for cheap laughs. But only time will tell, and I'd be very pleased if I turned out to be mistaken.

They've asked Spocko to participate; needless to say, he wasn't stupid enough to accept. Spocko's strength is that he appeals in good faith to broad community standards and sensible business practices (e.g., questioning the wisdom and morality of funding people who want to exterminate half your prospective customers). He has nothing to gain by singlehandedly taking on these bullies - and their engineers and audience - on their own turf. He understands that they're hothouse flowers, and can thrive only in a heavily controlled environment; the idea that their abuse of power could effectively be addressed by helping them to abuse their power further is a nonstarter, obviously.

Since they've essentially lost the real battle with Spocko, it's not surprising that these folks would want to drag him into their lair for a carefully choreographed rematch. My understanding is that Melanie Morgan has called Spocko a coward for refusing to climb into KSFO's hot seat, but as he points out, there's no reason such a debate couldn't have a more evenly matched lineup, and be held on neutral territory. For that matter, there's no reason Morgan et al couldn't venture out of their bubble, for once, and into "enemy" territory, without their training wheels or safety net. No reason, that is, beyond the obvious fact that they want ratings, and complete control of the discussion. And revenge.

It's not cowardly to decline an invitation to one's own lynching. What's cowardly is being unwilling to debate your opponent unless you and your cronies outnumber him four to one, and can cut him off or shout him down at will, and can choose whether or not to give his supporters a voice (as opposed to regular listeners who agree with you that "the liberal tree needs to be pruned").

KSFO's morning show is a microcosm of modern conservatism, really: thin-skinned, petty bullies remarkable only for their ability to lie fluently, and their inability to take even a fraction of the abuse they dish out.

Having gotten that out of my system, I'd like to draw your attention to the "Make a Donation" button at Spocko's Brain, which allows you to contribute to his legal defense fund. Alternatively, you can contribute to the EFF, which has been giving him free legal help. Or both.

I’ve been called a hero. I’m not a hero, a hero is a journalist in the middle-east working his or her ass off to tell a story that might cost them their life. Consider donating to the Committee to Protect Journalists.

My button for donations is on the right. It’s the button for PayPal right under Spocko's United Reserves Against Killing of Journalists and Liberals (Hey that spells out SURAK, of JAL wow what a coincidence!), and I put it up only at others’ insistence, but if you don’t have money, your kind words are welcomed too.

Comments:
Melanie Morgan sent out a message to her e-mail minions about tomorrow's talkfest on KSFO. (She forgot, however, to mention it was on Friday.) I have the message (yes, I confess that I am on her list) and I posted it here.

So, what are the chances of getting some bloggerros to at least email SNUFF Radio 560am for tomorrow, eh?


I'd sure hate to see a few intrepid, foolish bloggerros have to go up against SNUFF Radio 560am on their own.

which of Spocko's audio clips are "outright lies"?

You know, the ones where rightwingers were talking...

KSFO plans a counterattack in the form of a three-hour talkfest beginning at noon (Pacific time) tomorrow. Melanie Morgan and the other talk show hosts will defend themselves and hope their listeners will call in to shower them with love and support. They're calling Spocko a coward for not participating in their desperate defensive move. Morgan sent out an e-mail message to her Move America Forward minions in hopes of packing the audience. I've quoted it here. The radio station streams their audio signal, so you can listen in (and perhaps record the results) at ¿ on Friday.

I realize that most pipples are no eager to get on the phone weeth these hate-spewing culos at SNUFF Radio 560am, (Except for Mike Stark, the blessings of the madre de los gatos del paradiso be on joo Mike Stark)

¿However, what eef pipples here and elsewhere EMAILED their questions eento SNUFF Radio 560am ahead of time?

Of course, they would selectively quote from the emails to their benefit, but a deluge of email could have quite an impact, psychologically.

¿What do joo theenk,?

¿Do we have enough time to do thees before the show starts?
¿Can we enlist the aid of San Fran bloggerros for thees leetle project?

Spocko is so last week! I have a post about the new Spocko on my blog!

I'm still trying to decide if I can stand to listen to KSFO this afternoon, but I fully support what everyone is doing to hit the station where it counts - in the accounts receivable.

It's very simple, really: no one's saying they don't have the right to spew their hateful message - only that the advertisers ought to know what they are supporting with their ad dollars.

And now here's the response Spocko requested from me.

the advertisers have Fully functional adult senses of humor

you pukes laugh at drunks falling off the curb

someone pronounces some thoughtful cutting SARCASM.... and you pitiful JUVIE PUKES crap your diapers

How does this mrspammo know about the advertisers' senses of humor? Magic? BLACK MAGIC?!?